While the unwaning Chinese appetite for shark fin continues to boost the dirty trade in our city, what can we do about it?

Shark fin has a sky-high price to pay, and we’re not talking about the money you pay for this expensive delicacy. It’s the plight of a shark population that is now close to the brink of extinction, which will result in the irreparable breakdown of the marine ecosystem, leaving behind an impoverished ocean for our future generations.

Sadly, there are still ten of millions of sharks being hunted to meet the growing demand for shark fin around the world every year, particularly in east Asia. And it’s heartbreaking to discover that Hong Kong is leading the world on two fronts: the top country with the highest per capita consumption of shark fin; and the top trading hub for global shark fin trade, ahead of Singapore and Taiwan, according to information provided by Shark Savers Inc. This embarrassing truth was brought back into the limelight when environmentalist and photographer Gary Stokes captured local traders drying several thousands of freshly sliced shark fins on the rooftop of a building in Kennedy Town this past winter. The world was shocked, and outraged. 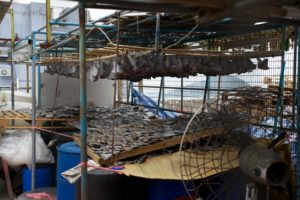 Walking along the street, we witnessed numerous stores who have flamboyant displays to show off the largest and oldest fin they have sourced, and sales of every profitable parts of the endangered fish – fins, meat and curios (teeth and jaws). When we raised the issues of sustainability and the hunting of sharks, our questions were brutally rejected; one shop owner even asserted that sharks were not endangered and that it’s the media and environmentalists’ tricks to harm their family businesses. Some also claimed that they only sold non-endangered sharks’ fin, but when we asked about the species from which the fins came from, they could not tell. 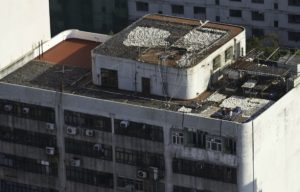 As the World Wide Fund for Nature (WWF) reports, shark populations, like those of other harvested marine fish, are not inexhaustible. The main threat to sharks worldwide is over-fishing, which has led to the decline of numerous populations and threatens their very survival. The situation is delicate and cannot be neglected. 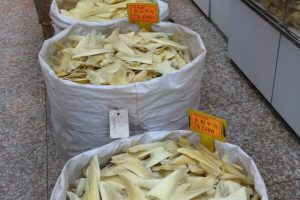 Ignorance is the culprit. According to the survey by the WWF, a majority of people would reduce the consumption of or even stop eating a certain seafood species if they know it’s an endangered specimen. So one of the prominent ways to reduce the consumption of shark fins is through educating people on the ocean and its ecosystem,  as well as their relations to us all. In order to spread the message and help people to understand the threat of consuming shark products, the Shark Savers is planning several events in 2013 such as the “I’m FINished with Fins” campaign that will take place for the first time in Hong Kong in July this year.

The campaign, which has been successfully carried out in Singapore and Taiwan, is put together by teams of volunteers, corporate good will and  celebrity endorsements. The event is primed to attract a large mass of citizens, to help push for regulatory measures in Singapore regarding the trade of shark fins.

However, the shark fin industry will see no end if there is still a demand for it. “Shark fin is seen as a symbol to show power, wealth and generosity. It is a sign of respect to the guests who are being served,” explains Chinese Executive Chef Ho Wai-sing of The Royal Garden hotel. This is the reason why shark fin is still considered a delicacy despite all the warning signs. Chef Ho reveals that diners at his restaurant will usually order shark fin during family gatherings, where sons and daughters will see this as a way to treat their parents and seniors. As a tradition passing on year after year in Asian culture, the image of shark fins is deeply rooted. The fact that it is tasteless, and endangered is no match for the psychological and cultural reasons for its consumption.

Bertha Lo, Programme Director of the Hong Kong Shark Foundation says, “However inappropriate, it makes some people feel good about themselves, be they serving it or eating it, I’d call that a self-esteem food.” This is not solely the comment of an environmentalist. Chef Chan Yan Tak of Lung King Heen at the Four Seasons also admits to the fact that shark fins is tasteless on its own, and that the enjoyable flavour solely relies on the broth or double-boiled soup that is served with it. “For a dish (such as shark fin soup) where soup is the essence, it can also be enjoyed with ingredients even as simple as vegetables.”

Although such there is still a long way to change these deeply-rooted perceptions, a direct shortcut to help the situation is by reducing the supply on the market. Hotel and restaurant groups play very important roles in raising awareness among the local public, as they are often the major providers of shark’s fin in meals, especially for wedding banquets.

Thus, the fact that many hotels in the city have now banned shark fin in their menus is very influential, and may go some way to help reduce its consumption significantly. We are happy to see that hotel groups such as the Four Seasons, Mandarin Oriental and Shangri-La have manifested their environmental support one after another. 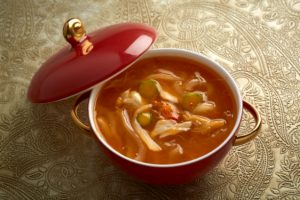 Announcing the ban of shark fins in January 2012, the Kowloon Shangri-La has demonstrated strong commitment and support to preserving our delicate ecosystem. “We do not see a negative impact on our business,” says Linda Wan, the hotel’s Resident Manager. We appreciate the effort of the hotel and its efforts to create more high standard delicacies to substitute shark fin soup, to ensure diners will get the same level of satisfaction and pleasure while dining in their restaurant. In your next celebratory occasion, we recommend you treating your beloved ones to this braised fish maw broth with crab roe and fungus (pictured above) designed by chef Mok Kit Keung for a decadent and guilt-free pleasure.